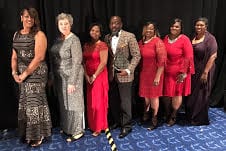 During the National Alliance of Black School Educator’s 44th Annual Conference, the Lancaster ISD Board of Trustees was recognized as the NABSE School Board of the Year.  The School Board of the Year Award is bestowed upon local school board members who have demonstrated an unwavering commitment to representing and facilitating the educational needs of school children of African-American descent.

“We have an excellent Team of 8,” Lancaster ISD Superintendent Dr. Mike McFarland said. “They have provided exemplary leadership and it is great to see that they are being recognized at the national level. Now the nation will know what I have known for quite some time…that we have an outstanding Team of 8.”

Board President Ty G. Jones said that the recognition provides acknowledgement that the Board and district are doing some things well.

“It also will allow for us to reflect and develop systems and procedures to allow for sustainability to ensure that our students are in an environment which will foster and yield academic success,” he said. “I am hopeful it will allow us to develop additional partnerships to assist us in realizing our vision that all students achieve self-sustaining success and leave a lasting legacy.”

In 2014, Dr. McFarland was selected as NABSE’s 2014 National Superintendent of the Year. Due to the continued dedication of the district’s trustees, he nominated the board for the national award.

Lancaster ISD has a student enrollment of about 7,500 consisting of a predominantly African American and Hispanic population. This year, all of the district’s campuses Met Standard and obtained 28 Distinctions under the Texas Education Agency’s Accountability system in 2016. Lancaster ISD has maintained a graduation rate exceeding 90% for five consecutive years.

Earlier this fall on September 24, 2016, Lancaster Independent School District was named the 2016 Texas Association of School Administrators (TASA) Outstanding School Board during the TASA/TASB Annual Convention in Houston, TX. The Lancaster ISD Board of Trustees was chosen from among five finalists that were interviewed by a committee of Texas school superintendents. The committee’s decision was based on several criteria, including the board’s support for educational performance, educational improvement projects and school transformation initiatives, commitment to a code of ethics, and placement of the welfare of children served by the school system above other motives.